Home › {:en}Air freight › {:en}”Moscow cargo”: new opportunities for the development of trade between Russia and China

{:en}”Moscow cargo”: new opportunities for the development of trade between Russia and China

In the Sheremetyevo international airport on April 17 with participation of the Ministry of industry and trade and the Russian Trade mission in China, the presentation of a cargo complex “Moscow cargo” for representatives of Chinese business. As part of the tour, the top managers of Moscow representative offices of the largest airlines in China, entrepreneurs and journalists met with the work of the recent Russian cargo terminal. 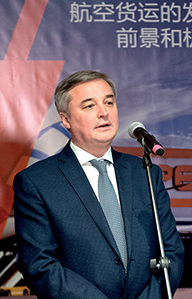 the Deputy Director of Department of Asia, Africa and Latin America of the Ministry of industry and trade of the Russian Federation ::
“Moscow Cargo”

Addressing the event, Deputy Director of the Department of Asia, Africa and Latin America of the Ministry of industry and trade of the Russian Federation Alexey Meshkov said that the past year of 2018 was a landmark for trade-economic cooperation of Russia with China, the trade turnover between the two countries, which in 2015 decreased sharply from 87 billion to 63 billion dollars, again shows a positive trend.

“According to Russian estimates, in 2018 the trade turnover between Russia and China amounted to 108,3 billion. We managed to reach the goal set by the leadership of our countries, — said the representative office. — In the future, great importance will be the expansion of mutual trade and the development of electronic Commerce, where it is impossible not to note the importance of air transportation. It is imperative for us to maintain the Sheremetyevo airport to attract potential partners, since we are considering the opening of a new cargo terminal as of great practical tool in the development of trade-economic relations”.