Home › {:en}Air freight › {:en}One day in the life of the largest cargo terminal of Russia

{:en}One day in the life of the largest cargo terminal of Russia 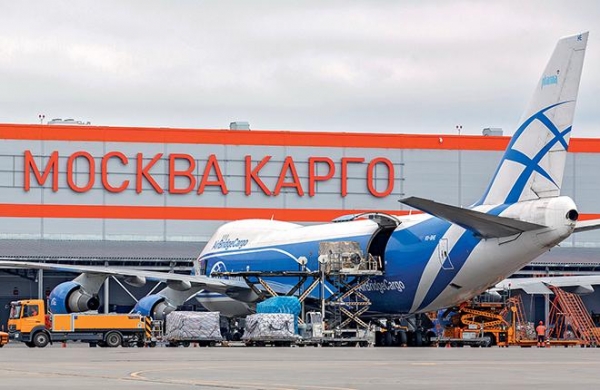 Entered the territory of the cargo complex is the largest airport in Russia, once you feel the magnitude of the realized project is a new building decorated in corporate style of the hotel is in close proximity to the old terminal “Moscow cargo” that allows you to visually see the difference in size. The terminal was commissioned just over a year ago, is the largest in Russia and CIS countries. It has an area of 42.3 thousand m2, with production capacity of 380 thousand tons of cargo per year. According to the company, for 2017, OOO “Moscow cargo” handled more than 240 thousand tons of cargo and mail, which was 44.5% of the total cargo and mail turnover of the airports (we are talking about handling excluding transfers out of the terminal. — Approx ATO.). Once inside, seeing the equipment, talking with professionals, you realize the volume of innovative ground handling for operators solutions.

Goods fall from the vehicle to the terminal through one of the 29 gates. Currently attending the launch of electronic system for automated control of the freight yard, which will allow to streamline the process and to increase the efficiency of receiving goods.

Company “Moscow cargo”, now part of the group of companies of JSC “MASH” and subsidiary which is part of a large-scale program of modernization and development of JSC “MASH”, was formed in 1990 as a cargo terminal of Lufthansa. The plant was originally built in full accordance with the airline requirements for standards of cargo handling that allowed the terminal quickly and firmly occupy one of leading places in the sphere of ground handling air cargo of MAU, having won the trust of clients such as Aeroflot, Singapore Airlines, SAS etc. In 2013, when the company became a part of LLC “Cargo complex Sheremetyevo”, a subsidiary of the MASH, its annual turnover was of the order of 100 thousand t In the “asset” of the company were also highly qualified staff, proven technologies and experience of ground handling of cargo and mail. In 2014, the resulting company was renamed OOO “Moscow cargo”.
In July 2017 at Sheremetyevo was completed the construction of Russia’s largest cargo complex “Moscow cargo”.
Work commenced in March 2016, was conducted in the intensive rhythm of the needs of industry and the growth of the airport, which is actively developing infrastructure: freight complex was built and commissioned in less than a year and a half.
In September 2017, the terminal received the first cargo in the next two months to process the new terminal was transferred to the entire turnover of domestic airlines, and in January 2018 — international.

Starting from the stage of receipt of the goods for carriage, the number of manual operations are minimized: the load placed on the storage tray to which the Manager binds the airway bill, after which the pallet is placed on an automated line — from this moment all subsequent operations are automatic. Moving along the line, the load enters the tunnel introscope for inspection by the aviation security service of the airport. From introscope the cargo is transported further to a sorting platform where automatically determining its weight and volume, and then he goes all on the same line in an automated system for processing and storage of cargoes on pallets warehouse (Automated Storage/Retrieval System) ASRS. 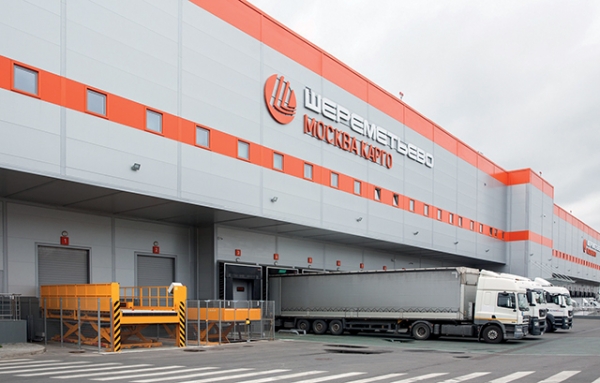 Gates for receiving cargo, two of which are equipped with hoists and is designed for bulky loads, including vehicles :: “Moscow cargo”

A seven-tier system ASRS installed in the terminal “Moscow cargo” includes 3198 cells and three working lines, each of which has four the crane in a fully automatic mode.

In the zone configuration from the system load ASRS also served automatically by command to the output trays attached to the waybills on the flight. 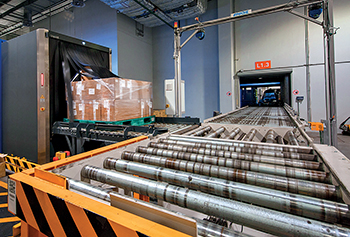 Automated line by which a shipment is sent to the system ASRS :: “Moscow cargo” 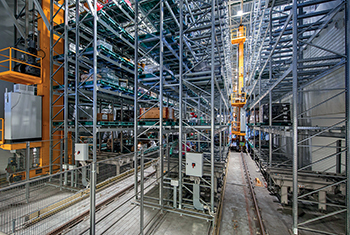 It should also be noted that all the transfer loads when placed in the ASRS system will automatically undergo the procedure of re-weighting, in which are recorded any deviations from the stated weight. Further, the shipment of the airline passed the correct weight parameters in full compliance with aviation security requirements.
Special attention is given to the equipment installed on the ground floor of the terminal in the zone set/disassemble tools package (aircraft pallets, and cargo containers), or ULD (unit load device), as they shorten it and call professionals. 20 dynamic workstations, are equipped with a lifting and lowering mechanism, greatly simplify the work with high ULD contour, allowing to lower the platform necessary for the safe handling height. According to employees of the company, today the terminal “Moscow cargo” is the only aviation cargo terminal in Russia, equipped with such stations.

Ready to ship ULD fit in an automated processing system means packaging PCHS (Pallet Container Handling System). The total capacity of the system PCHS is 576 cells for the ULD, 60 of which are for ULD with temperature-sensitive goods. The system is equipped with three automatic 20-foot hoisting-and-transport devices ETV capacity of 13.6 t each.

When you send a completed ULD in the PCHS system is automated weighing and checking of conformity of the contour of the ULD. Finding the deviations, the system automatically returns the ULD on the working station, thus providing additional control over compliance with requirements on completion.

Another feature of the operation of the system PCHS is a function of automatic feeding to the platform loaded with a cargo in time for the start of flight handling. The system is equipped 13 of conveyor belts, facing the platform, to the berths which are displayed ULD.

The process of carefully and painstakingly debug with a hardware vendor — the company Lodige, in which a cargo terminal KLM in Amsterdam, DHL in Leipzig, Fraport in Frankfurt and other major commercial aviation hubs.

International transfer goods traditionally given special attention. On the one hand, processing of international transfers — the most expensive process in the list of services of any ground handling operator, which includes two full cycle warehouse handling, customs clearance on arrival and departure, and two delivery platform. On the other hand, is the most actively developing sector of the industry: in 2017 in the terminal, OOO “Moscow cargo” handled more than 97 thousand tons of transfer cargo MVL, which is 68.5% more than in 2016.

It should be noted that in the terminal are automated to 60% of the operations of the production cycle. For comparison: in London’s Heathrow airport, leading from the point of view of automation of production processes in Western Europe, the figure is 75%.

Special attention in the terminal is given to the handling of special categories. On the ground floor are located the warehouses of dangerous goods, equipped with double doors. These warehouses can store all the objects approved for air transport, until the 7th hazard class (radioactive materials).

In addition, the terminal features 26 cold chambers with individually adjustable temperature control storage that can handle all types of perishable goods and a room for live animals, equipped in accordance with the requirements of the veterinary control. On the second floor are located the warehouses of valuable goods, which includes gas suppression system and control the level of humidity.

Plans for the future

At the moment, OOO “Moscow cargo” daily serving of 10 to 15 cargo flights and more than 500 passenger flights. As a result, over 24 h, the complex handles more than 600 t. the company’s Key clients are airlines, Aeroflot and AirBridgeCargo.

In 2020 “Moscow cargo” plans to launch the second phase of the new terminal, due to the dynamic development of the airport. Before the world championship of 2018 was opened a new terminal B, currently under the first stage of reconstruction of the terminal C. is nearing completion and the construction of a third runway. Recognized and growing needs of the base carrier of the airport — the airline “Aeroflot”, which successfully increase the volume of passenger and freight transport. By the end of 2017 the turnover of Aeroflot amounted to about 30%.

According to Michael Chuvylkin, first Deputy General Director of “Moscow cargo”, at the moment the second phase of the terminal is at a preliminary design stage: “it is Necessary to develop a marketable product. For example, handling of oversized cargo, aircraft engines, large quantities of live animals — this is something of interest to freight carriers”. It is expected that the contract for the design of the terminal has to be agreed next year.